The Collect show represents the peak of quality and diversity for cutting edge work among living makers from around the world. Presented by the UK’s Craft Council, it is now in its 15th year.

It is unique in the UK, as it brings together some 40 international galleries occupying three floors of the Saatchi Gallery in central London. This year, 11 new galleries were represented, reaching a total of 400 makers from 30 countries on display. Within the craft sector, ceramics was predominate.

As you entered the imposing Saatchi building, you could see a statement ceramic piece at the entrance to the show. This was created by Chinese artist Wanying Liang, while she was completing her MA at the NYS College of Ceramics at Alfred University, USA.

Liang was inspired when she encountered chaos and complexity as she sought to connect with people across different cultural spheres while she studied in America from 2016-18. Her work invites the viewer to enter a contemplative space where time slows down and the anxieties of daily life are set aside, allowing a sense of belonging and stillness to emerge.

The work was exhibited ahead of its appearance at the Victoria & Albert Museum in London later in the year. Liang produced her dramatic two-metre high porcelain sculpture entitled ‘Gravity in Pray’ together with streaming paper, hung from an adjacent 10-metre high ceiling. She encourages us all to connect, to consider and even to dream.

Amongst the weight of the commercial galleries, there was still room for a section in the show called ‘Collect Open’ which showcased installations by individual makers, who were simply representing themselves. Two makers which stood out this year are Mary O’Malley and Charlotte Pack.

Mary has recently returned from working in China at JingDeZhen where she was struck by the confusion between two cultures, being China and the USA.

In her work she has taken what is traditional Chinese decoration and transposed it onto the very USA cultural icon – the barbecue.

Mary trained in Philadelphia and at the Royal College of Art, and is a founder member of the ‘Collective Matter’ group of ceramic makers in London.

In contrast, Charlotte Pack is concerned with the threat to wildlife by an ever encroaching human environment.
For this show, she made 100 elephants during ‘Wildlife Conservation Day’ when she stayed awake for 24 hours hand-sculpting the elephants in porcelain. This is the same number which are killed each day, driven by the insatiable global demand for ivory. 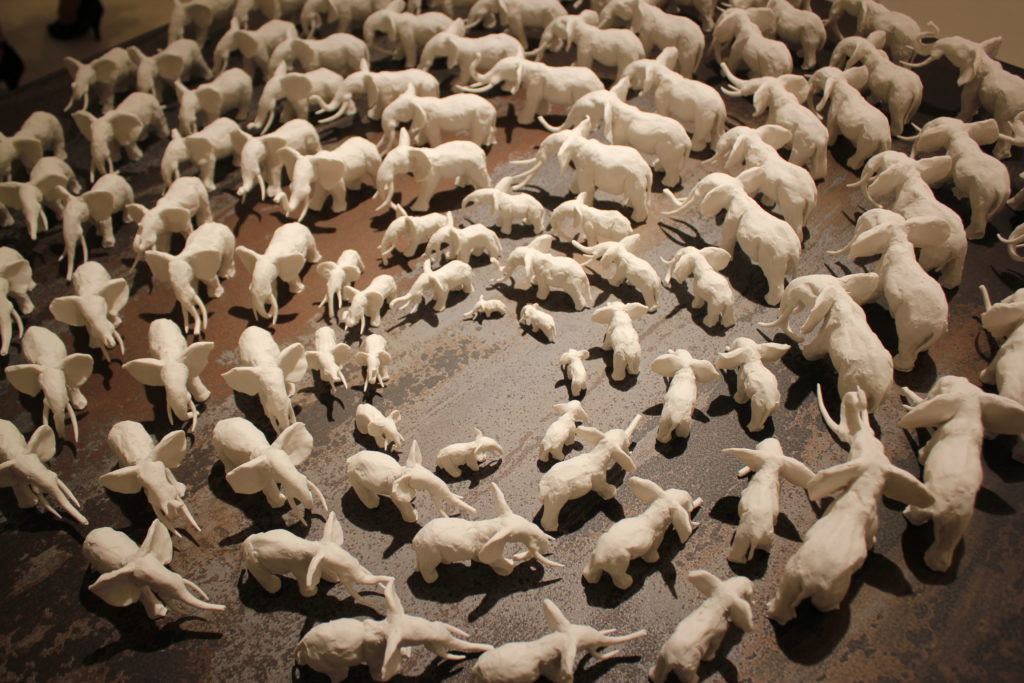 Later in the year she has been invited to show her work and lecture in Hong Kong with a solo show.

Kim Hostler and Juliet Burrows, who run a gallery in New York were first time exhibitors at Collect, and brought a daring ceramist, Kristina Riska from Finland.

Her hand-built coiled forms – sometimes abstracted figures, sometimes completely free-form – all have both presence and fragility, reaching over a metre in height. 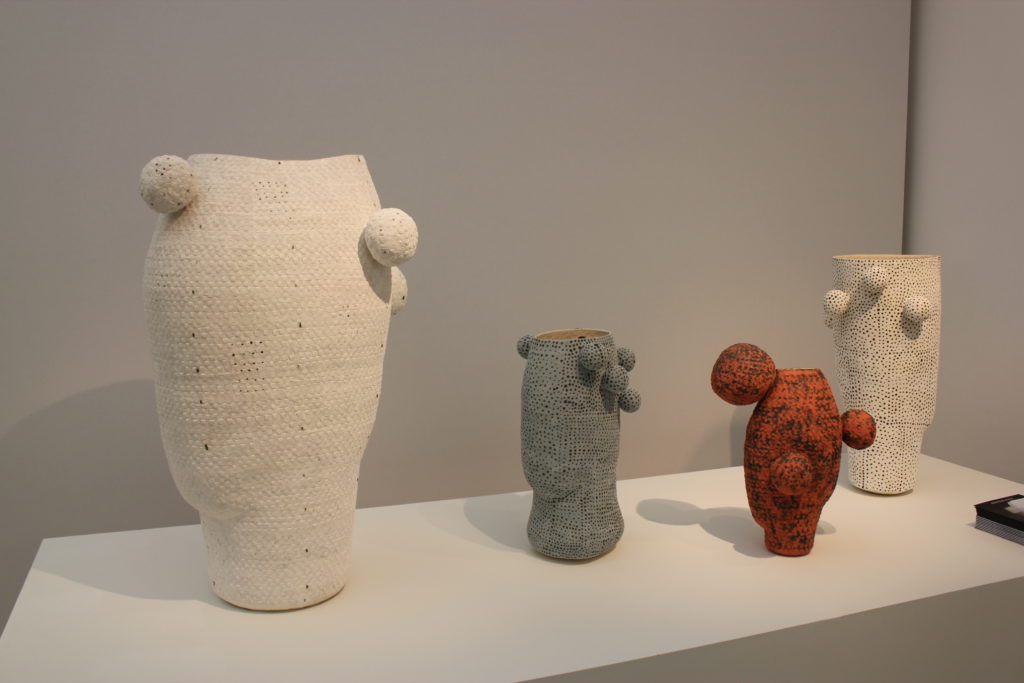 The Korean Craft & Design Foundation (KCDF) is a public organisation under the patronage of the Ministry of Culture, Sports and Tourism in South Korea.

Founded to promote and support Korean craft and design, KCDF plays an important role in developing a global awareness and understanding of Korea’s rich craft and design heritage.

One of the makers represented by KCDF was Park Seo-hee, who experiments with traditional celadon glaze, achieving a bold and contemporary, tonal elegance.

Park describes the series as ‘Polygonal bottles’ while maintaining their fundamental use as vessels to hold Korean and Japanese sake.

The Mint gallery works exclusively in craft and contemporary design, and was established in Central London in 1998 by Lina Kanafani.

Joining them this year was Alice Walton. She produces sculptures that provoke intrigue by exploring complex and intense surface patterns.

By their nature they are very time consuming to make, using different techniques from pin pricking, pipetting, and layering hand coloured porcelain and stoneware clays. With all of her work she keeps glazing to a minimum.

Alice is a co-founder of a new studio in East London called ‘Method at Culford Studio’ with seven other makers, all of whom graduated from the Royal College of Art. It was previously the studio of Kate Malone.

Although the show was about makers and the galleries who are pioneering the craft movement, there’s no denying the part collectors played in the broader possibilities of the fair.

When Collect was first started by the Crafts Council, it was largely a UK group that supported the initiative . However, in the last decade it has been joined by an international contingent of private buyers, plus investors and buyers for public institutions from around the world.

Then there is the role that London has played in being a focus for art and design through London Design Week, the Ceramic Art London show, the Royal Academy Summer Show and the role art colleges continue to play and popularity of their final year degree shows.

So, for a commercial show with a vast range of work on offer and a seemingly insatiable demand for work, Collect was the right thing at the right time. All praise to the Crafts Council and their international view of the future.

To see more of the work which went on display at this year’s show, visit: Collect 2019.