Made directly in the space at Southampton City Art Gallery in 2015, Production Line was a construction of clay built onto a rope and hoisted as it was made.  The temporary sculptural work considered the choreography of making, beyond the studio or factory, and the possibility for clay to produce objects which are neither fixed nor permanent. 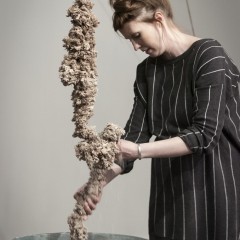 Cummings uses a labour intensive process of pressing clay through a tea strainer to produce a fine texture of clay. This traditional technique was historically used to suggest grass or fur on ceramic figurines, but is used here on a large scale abstract form.  At the end of the installation, the piece was dissolved into water and the clay re-claimed as raw material. 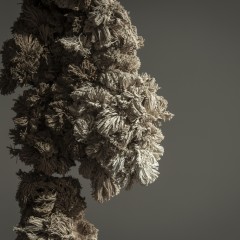 The work breaks boundaries in conventional museum collecting and in contrast to previous acquisitions, will remain in the permanent collections of York, Southampton and Gateshead in the form of an archive of films and photography as seen in this display. 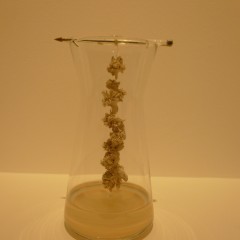 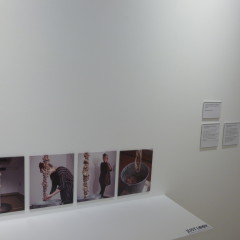 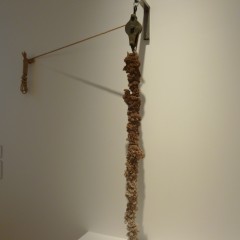 Phoebe Cummings (1981-) studied Three-Dimensional Crafts at the University of Brighton, before completing an MA in Ceramics & Glass at the Royal college of Art in 2005.

She works without a permanent studio space, creating detailed installations and sculptures directly on site.

She has undertaken a number of residencies, exhibitions and commissions in the U.K, U.S.A and Greenland, including six months as ceramics artist-in-residence at the Victoria & Albert Museum, 2010, a fellowship at Camden Arts Centre 2012/13 and a solo exhibition at the University of Hawaii Art Gallery, Honolulu.  In 2011 she was the winner of the British Ceramics Biennial Award.